The End of the 66th Montana Legislative Session: What You Need to Know

Lawmakers had a big job during the 2019 Montana legislative session. They voted on laws and policies ranging from our state budget to access to health care.

Together, we made sure that none of these important decisions were made without the input of those most impacted. We made thousands of phone calls to voters, showed up in force to rally and lobby for healthcare, shared hundreds of personal stories, wrote letters to the editor in every major Montana newspaper, and submitted thousands of comments to legislators!

The 2019 Legislative Session has come to an end, but Montana Women Vote will continue to keep you informed and give you the tools to affect policy and create change in Montana.

Montana’s Medicaid expansion program provides health insurance to nearly 100,000 Montanans, but without legislative action, the program would have expired in July of this year.

On Thursday, April 18th, the Montana Legislature passed House Bill 658, carried by Rep. Ed Buttrey. HB 658 is a compromise policy that protects care and allows Medicaid expansion to continue, which means nearly 1 in 10 Montanans would continue to have access to health care!

House Bill 658 is currently waiting to be signed into law by the Governor.

“Many people with low incomes work full-time jobs. Suspending licenses for inability to pay court debt traps them in vicious and often inescapable cycles of poverty and entanglement with the criminal justice system.” – SK Rossi, ACLU of Montana

House Bill 217 passed and is currently waiting to be signed into law by the Governor.

House Bill 21, carried by Rep. Rae Peppers, would establish “Hanna’s Act,” an important first step toward addressing the crisis of Missing and Murdered Indigenous Women (MMIW). HB 21 would authorize the MT Department of Justice to assist with MMIW investigations and require the employment of a Missing Persons Specialist. HB 21 passed and is currently waiting to be signed into law by the Governor.

House Bill 20, Senate Bill 40, and House Bill 54 included additional solutions that would tackle the MMIW crisis, including revising missing persons reporting requirements and creating an electronic photo repository. HB 20 passed and was signed by the Governor. SB 40 and HB 54 both passed and are waiting to be signed into law.

House Bill 219, carried by Rep. Shane Morigeau, would have removed Columbus Day as a statewide holiday and establish “Indigenous Peoples Day” in Montana, effectively replacing a holiday honoring a perpetrator of genocide with a holiday honoring our Native friends and neighbors. Unfortunately, HB 219 was tabled in the Senate State Administration Committee.

House Bill 500 would adopt the Montana Pain-Capable Unborn Child Protection Act, and Senate Bill 354 would adopt the Montana Born-Alive Infant Protection Act, two dangerous attempts by politicians to interfere with the privacy and health care of Montanans. Both HB 500 and SB 354 passed the legislature and are waiting to be vetoed by the Governor. Click here to request a veto!

Senate Bill 100, an intrusive and unconstitutional invasion into the doctor-patient relationship, also passed the legislature and is awaiting a veto by the Governor. Click here to request a veto!

House Bill 707, carried by Rep. Kim Abbott, would have limited the capital gains income tax credit. The super wealthy have been able to take advantage of this tax break, costing the state millions in revenue. HB 707 would have ensured that the wealthiest households – those with incomes over $1 million – are paying their fair share. Unfortunately, HB 707 was tabled in the House Taxation Committee.

House Bill 465, carried by Rep. Kim Abbott, would have added “sexual orientation, gender identity, and gender expression” to the Montana Human Rights Act, giving LGBTQ+ Montanans the opportunity to earn a living and take care of their families without the fear of being fired or denied housing. Unfortunately, HB 465 was tabled in the House Judiciary Committee. 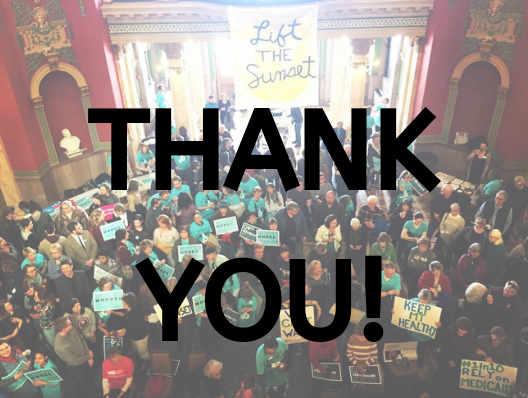 There were so many ways to take action over the last four months. I would personally like to thank all of you who took the time to attend a rally, lobby day, hearing,  contact your legislators, phone bank, or share your story. You made a difference!

If you have questions about what happened this legislative session, join us for our Legislative Wrap-Ups on May 9th in Missoula or May 14th in Helena!